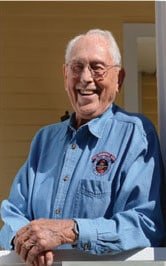 He had a smile a mile wide. His caring spirit was contagious. He was Gordon Caldwell, a beloved community leader and friend. On Saturday, July 22, 2017, at age 93, Gordon died shortly after returning home from the hospital with his wife of 30 years, Mary Lou, by his side.

Gordon meant a lot to the community of Sierra Madre. He moved to the city in 1958, where he and his partner Hal ran GEM plumbing for 37 years. That year he also joined the Sierra Madre Volunteer Fire Department. He was a member of VFW Post 3208, a faithful member of the Sierra Madre Kiwanis Club, and was recognized many times for his extensive volunteer efforts in the City of Sierra Madre. He was a recipient of the George Maurer Award for a lifetime of Volunteer Service, was Grand Marshal of the Sierra Madre 4th of July Parade, and so much more. He organized blood drives as a volunteer for the American Red Cross and was responsible for collecting more than 2,000 units of donated blood.

However, Gordon was probably best known as one of the few survivors of World War II. He was drafted into the U.S. Navy in 1943 and served aboard the Carrier USS Saratoga in the Pacific, surviving seven battles, the last of which was Iwo Jima.

Also the recipient of many military honors, he was a member of the Saratoga Association. Last year, he donated to the nation’s WWII Museum a gun that he retrieved after a Kamikaze attack on the Saratoga.

Born on a farm in Louisburg, Missouri, on February 24, 1924, he was the youngest of five boys and three girls. He lost his mother to cancer when he was just 5 years old. When he graduated High School in 1943, his military service began.

After the war, Gordon moved to California, where he worked for Shell Oil in Ventura. He married Mary Evelyn Hyde, and their family consisted of 3 girls and 1 son. They moved to the City of Sierra Madre in 1958, where they raised their family. His wife passed away in 1985 after a long battle with cancer.

A few years later, Gordon married ‘the girl next door,’ Mary Lou Caldwell, to whom he remained married until the time of his death.

He is preceded in death by his parents, his brothers Virgil, Milford, Leland, and sisters Hazel, Lucile, Wilma, and his daughter Judith Ann.

He is survived by his wife Mary Lou; daughters Connie (David), Luzan Terri Curtis, and son Jerry (Jodi) Caldwell, and Brother Lowell (Gayle) Caldwell; 7 grandchildren and 7 great-grandchildren; 2 nieces, 6 nephews, and a host of other grand and great grand family members.

In lieu of flowers, please donate to your favorite charity or the Sierra Madre Volunteer Firefighters Association P.O. Box 911, Sierra Madre, Ca. 91025 or