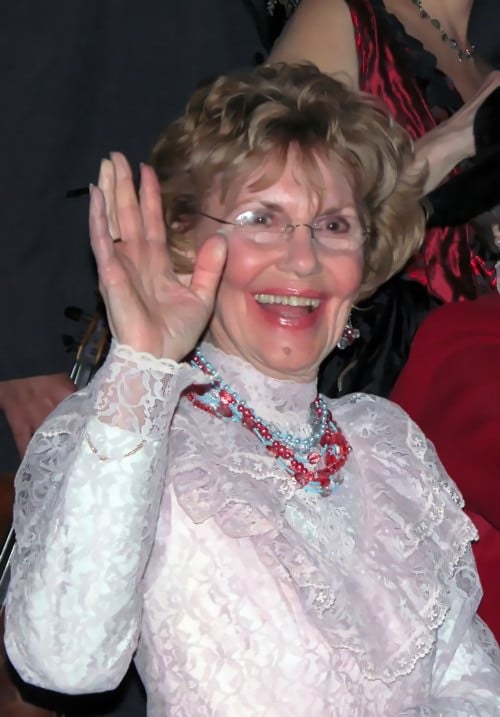 Most knew Jan Reed as a friend, Citizen of the Year, Kiwanis member, neighbor, activist, and humorist.

Our mother, Jannene G. Reed, was an amazing optimist who considered herself “the luckiest person in the world.” She passed onto her new heavenly life incredibly peacefully on Saturday, December 17, 2016, at the enviable age of 87. In fact, a veteran nurse at Huntington Memorial Hospital who witnessed her transition stated that she had never witnessed such a peaceful death. She truly was a mother who taught us how to live and then how to pass on.

Mom was born the youngest of four daughters to Frank James and Pearl Margaret Griffith on a farm outside of Wayne, Nebraska, on February 8, 1929. Family lore has it that it was 21 degrees below zero. As a girl, Mom loved to play the piano, make up songs, write poems and stories. Later she started drawing comic strips. She constantly drew, illustrating most stories she studied and various classical stories she read.

As a young woman, she began to work at the Wayne Herald (the local newspaper), collecting subscriptions at first, then she went into writing. Later she became Features Editor. Mom attended Wayne Prep High School, where she was Homecoming Queen and valedictorian – which came with it four years of college classes at Wayne State College FREE.

Mom met Don Reed at Wayne State College in their junior year (she was 4 months his senior), and they were married on April 5, 1953. He had enlisted in the Air Force, and they were stationed first in Madison, Wisconsin; then Sault St. Marie, Michigan; and then Chicago, Illinois. In Chicago, Mom worked as a layout prospective artist for General Telephone Company. They subsequently moved to Kearney, Nebraska, where Dad was a news director and Mom was a copywriter. When Dad decided to go to law school, they moved again to Vermillion, S.D. As Dad got his JD, mom taught art in the local schools. On October 5, 1959, and their second child, Barbara Jayne (Barbee), was born on December 20, 1961.

Mom and Dad moved our family from Wayne to Honolulu, Hawaii, in 1972. They settled permanently in Southern California in 1974,  first in San Marino, then the Sierra Madre, and finally retiring in Pasadena. In San Marino, Mom worked for the local newspaper, the Tribune. Her dream was always to own a small newspaper and be editor and publisher, so when the Sierra Madre News became available in 1980, she and Dad bought it. Mom called it “a broadsheet, typical ‘country’ weekly newspaper.”

The Sierra Madre was wonderful to Mom and Dad. Camee and Barbee had left the nest, and Mom was truly a town leader. In the 1980s, she kept very busy with the paper, the printing business that came with it and was invited to serve on the Methodist Hospital’s board in Arcadia. This was a golden time for Mom and Dad.

By 1994, though, Mom was getting pretty tired (her hours were horrendous as both editor and publisher), and they sold the paper. Unfortunately, the paper itself folded (without her inspired leadership) in 1996. Mom stayed very active in town, belonging to several groups, including Kiwanis (she was one of the first women members). She was humbled and thrilled to become Sierra Madre Citizen of the Year in 1995.

She has stayed active and vital, rarely sitting still. At their retirement community in Pasadena, Mom wrote profiles of many of the employees and residents. She continued to find humor in many situations and be positive even as the years caught up with her.

Mom is survived by Dad, Camee, Barbee, and four beloved grandchildren – Wesley (Megan), Jayne, Sara, and Henry. We are confident that St. Peter met Mom at the Pearly Gates with a typewriter, a deck of bridge cards, and directions to the nearest piano. She won’t sit still long.